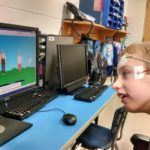 This is Mitchell's Story

Imagine being completely cognizant of your surroundings. You understand the people around you perfectly, but you have no way of communicating that to them. In fact, you have no way of communicating at all. You are trapped in a body that won’t respond to your commands. You have no bodily control, can’t speak, and rely on a tube for food. Others look at you as a child who doesn’t understand, but on the inside, you are just like everyone else. Imagining this, if only for a second, will allow you to see life through the eyes of the kids I have the privilege to work with at EagleEyes.

When I decided to re-embark on my journey to medical school, I was introduced to the Eagle Eyes program and most importantly, to a 14-year old boy named Mitch. He suffered an accident when he was a baby that put him in the hospital where mistakes were made that left him oxygen deprived for several hours, leading to severe brain damage. He was born healthy and would now live his life with partial blindness, and symptoms similar to cerebral palsy. This beautiful little boy changed my life. He was exemplary of true strength and toughness. I was blessed to work with Mitch for almost a year using a program that allowed him to control the cursor on a computer screen using receptors placed around his eyes that could pick up on the electrical signal from his optic nerve and eye movement. Mitch was finally able to control something in his life. Watching him develop and grow as he used the program was an incredible experience. It was miraculous to see him come out from behind the curtain and finally be able to express himself. To facilitate the application of the EagleEyes technology to allow him to do something so simple, yet so profound to him was inspiring.